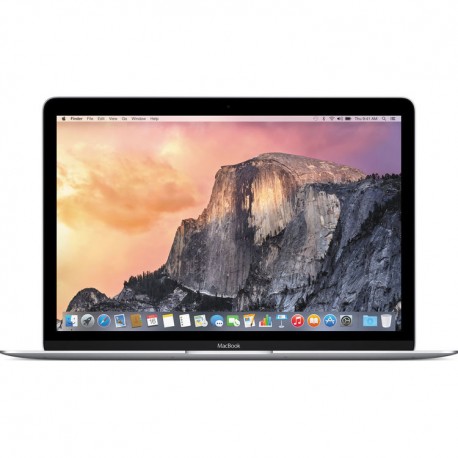 With a Retina display and a thin, lightweight design, the silver Apple 12" MacBook (Early 2015) provides both portability and performance. Measuring just 0.5" (13.1 mm) thin and weighing just 2 pounds, the MacBook is compact yet still has a premium feel, thanks to its unibody design.

The MacBook features a 12" Retina display with 16:10 aspect ratio and 2304 x 1440 native resolution, which results in 226 pixels per inch (ppi). The display also has a 178° wide viewing angle. To deliver the total Retina experience on the MacBook, Apple redesigned the pixels to create a larger aperture, allowing more light to pass through. This enabled Apple to use LED backlighting that's 30 percent more energy efficient than the Retina display on any other Mac notebook, yet still achieves the same vivid level of brightness.

Inside the MacBook you'll find the fifth-generation Broadwell Intel Core M processor, which is designed with 14-nanometer process technology. This means that the chip is packed with more transistors than the previous generation, for higher density and more efficient performance. Since the Intel Core M only draws 5 watts of power and generates less heat than its predecessors, Apple is able to omit the fan. Instead, the logic board, which is 67% smaller than the one in the 11" MacBook Air, is seated on top of an anisotropic graphite sheet, which helps disperse any heat that is generated out, to the sides. No fan also means the MacBook will be virtually silent. Even with its miniaturized internal components, the new MacBook has an impressive capacity, featuring 8GB of fast, power-efficient 1600 MHz LPDDR3 onboard RAM and 256GB of PCIe-based flash storage.

Since the logic board is much smaller and there is no fan, Apple decided to use the remaining space in the new MacBook to install a custom battery. The result is 35 percent more battery capacity than before, which adds up to 9 hours of web browsing and up to 10 hours of iTunes movie playback (battery life may vary depending on usage).

In order to maintain its thin and light design, the MacBook features a universal connectivity standard that combines the essential functions you need every day in one dynamic port. The USB-C port offers charging, quick USB 3.0 data transfer for connecting to external devices and peripherals, and video output that supports HDMI, VGA, and Mini DisplayPort connections. It is all in a reversible design that's one-third the size of the current USB port.

The Force Touch trackpad features Taptic Engine, which provides a click sensation when you press anywhere on the surface. The sensory capabilities of the Force Touch trackpad allow you to tell your MacBook what you want it to do, based on subtle differences in the amount of pressure you apply as well as providing haptic feedback.

The MacBook also embraces 802.11ac Wi-Fi for fast wireless Internet access. It also has Bluetooth 4.0 technology, which allows you to connect wirelessly to supported peripherals and accessories.

12" LED-Backlit IPS Retina Display
The 12" Retina display on the MacBook doesn't just have a high resolution, but it's also paper thin. In fact, it is just 0.03" (0.88 mm). A specially developed automated manufacturing process forms the impossibly thin edge-to-edge glass that's only 0.02" (0.5 mm) thick. And Apple reduced the space between display components for a tighter, more integrated design. The Retina display has a 2304 x 1440 native resolution and a 16:10 aspect ratio. It also has a 178° viewing angle, thanks to its IPS panel.

To deliver the patented Retina experience on the MacBook, Apple had to innovate on every level, right down to the pixel. So Apple redesigned the pixels to create a larger aperture, allowing more light to pass through. This enabled them to use LED backlighting that's 30 percent more energy efficient than the Retina display on previous models, yet still achieve the same level of vivid brightness.

Force Touch Trackpad
The Force Touch trackpad may look like other trackpads on the surface, but it's what is underneath that makes it distinct. Force sensors detect how much pressure you're applying and the Taptic Engine provides a click sensation when you press anywhere on the surface. Now the click that once was a single, mechanical function is just the start of what you can do with Force Touch. The sensory capabilities of the Force Touch trackpad allow you to tell your MacBook what you want it to do based on subtle differences in the amount of pressure you apply. This makes it possible to perform a variety of different actions in different apps, all on the same surface. And it can respond with haptic feedback you can actually feel, making your MacBook more usable and personal.

Traditional trackpads use a "diving board" mechanism, which requires room underneath for the downward motion of a click and makes it harder to click the part of the surface closest to the keyboard. With the Force Touch trackpad, force sensors detect your click anywhere on the surface and move the trackpad laterally toward you, although the feel is the same familiar downward motion you're accustomed to in a trackpad. The Taptic Engine also provides haptic feedback, so instead of just seeing what's happening on the screen, you can feel it, too. The trackpad sends a tangible response to your fingertip when you perform certain tasks, like aligning annotations on a PDF.

In addition to the intuitive Multi-Touch gestures you may be familiar with - like scrolling, swiping, pinching, and rotating - Force Touch brings an added dimension to the Mac experience. The sensitivity is customizable, allowing you to adjust how much pressure is needed to register a click. And the trackpad can even tell whether you're clicking with your thumb or another finger and automatically adjusts the sensitivity level.

Redesigned Keyboard
Traditional keyboards use a scissor mechanism, which tends to wobble around the edges. This creates a lack of precision when you strike anywhere except the center of the key. Apple needed to reduce key wobbling for a keyboard this thin; otherwise, striking a key off-center could result in the keycap hitting bottom before a keystroke registers. So Apple designed a butterfly mechanism, which is wider than the scissor mechanism and has a single assembly made from a stiffer material - allowing for a more stable, responsive key that takes up less vertical space.

The redesigned keys on the MacBook feature a larger surface area, a thinner construction, and a deeper curvature, creating a more defined space for your fingertip to naturally find and press the keys. These refinements may be subtle, but the feel is distinct and intuitive. Combined with the butterfly mechanism, this innovative design allows for much greater control when typing.

Since the keyboard is thin, Apple had to address how to backlight the keys in a way that took up less space while delivering an even cleaner and more refined look and feel. To do that, Apple removed the row of LEDs and the light guide panel that distributed light throughout the keyboard and instead placed an individual LED under each key. These LEDs are calibrated for uniform brightness, so every key and character looks clear and sharp with minimal light around the keycap. All while being engineered for as much energy efficiency as possible.

Thin, Lightweight Design
Each component inside the MacBook has been meticulously designed to get the most out of a thin and light enclosure. Apple started with an efficient 5th-gen Broadwell Intel Core M processor, coupled with fast Intel HD Graphics 5300, and optimized OS X to draw on the processor using as little power as possible. Because no fan is needed to cool the MacBook, it runs silently and without any moving parts, and it has more room for battery cells to provide all-day performance.

Since the Intel Core M chip draws only 5 watts of power and therefore generates less heat, no fan or heat pipe is required. Instead, the logic board is seated on top of an anisotropic graphite sheet, which helps disperse any heat that is generated out to the sides, all while your Mac stays virtually silent. The MacBook is made even more efficient by OS X features like Timer Coalescing, App Nap, and Safari Power Saver, which ensure that every task is performed using just the right amount of power.

With the MacBook, Apple was able to take what they learned from making thin yet powerful devices like iPhone and iPad and push that knowledge even further. Apple carefully arranged the processor, flash storage, and memory on a small yet highest-density logic board.

Even with its miniaturized internal components, the MacBook has an impressive capacity to store the files and run the applications you need every day. MacBook features 8GB of fast, power-efficient 1600MHz LPDDR3 onboard memory. Combine that with 256GB of flash storage and you get a thin and light notebook with fast, efficient performance.

Custom Shaped Battery
To achieve all-day battery life, Apple needed to use every millimeter of space inside the slim MacBook enclosure. Traditional rectangular batteries leave unused space when placed in a curved enclosure, so Apple created a battery technology that allowed for an innovative terraced battery cell, custom shaped to fit the specific contours of the enclosure. The result is 35 percent more battery cell capacity. So all the available space in the enclosure is used, and you have all the battery life you need to get you through the day. This gives you up to 9 hours of web browsing or up to 10 hours of iTunes movie playback (battery life may vary).

Dual-Core 5th-Gen Broadwell Intel Core M Performance
The 5th-gen Broadwell Intel Core M processor with 14 nm process technology provides fast dual-core performance. The dual cores can run at a stock speed of 1.1 GHz. The processor can be overclocked up to 2.4 GHz, thanks to Intel Turbo Boost 2.0 technology. With a 4MB L3 cache and 8GB of onboard 1600 MHz LPDDR3 RAM, the MacBook provides fast and energy efficient performance.

USB-C
To create a notebook as thin and light as the MacBook, Apple had to strive for efficiency in every detail, right down to how it connects to peripherals and power. So Apple contributed to a growing universal connectivity standard that combines the essential functions you need every day in one dynamic port. The USB-C port offers charging, quick USB 3.0 data transfer for connecting to external devices and peripherals, and video output that supports HDMI, VGA, and Mini DisplayPort connections. All in a small, reversible design that's one-third the size of the current USB port.

Fast Flash Storage
Part of what makes MacBook so responsive is that it's designed entirely around flash storage. Not only does this make MacBook Air much lighter and more portable than traditional notebooks, it also provides faster access to data. The flash storage is up to 9 times faster than a traditional 5400 rpm notebook hard drive.

Fast Memory
The MacBook features 4GB of 1600 MHz LPDDR3 RAM. Combine that with powerful processors and faster flash storage and you get a notebook that can run more memory-intensive applications at the same time - without compromising performance.

802.11ac Wi-Fi: Three Times Faster
With an emphasis on mobile, the MacBook is equipped with 802.11ac Wi‑Fi and Bluetooth 4.0 wireless technology. With AirPlay and Apple TV, you can wirelessly play video, show off photos, and enjoy music from your MacBook on your widescreen TV. And when your MacBook connects to an 802.11ac Wi‑Fi base station, such as AirPort Extreme or AirPort Time Capsule, your wireless performance is up to three times faster.

Mac OS X Yosemite
The MacBook ships with the Mac OS X 10.10 Yosemite operating system. With a redesigned interface, Apple continued their integration between Mac OS X and iOS devices. Relying on iCloud and your Apple ID, both Mac OS X Yosemite and iOS 8 work together to ensure you can switch seamlessly from your iPhone or iPad to your MacBook.