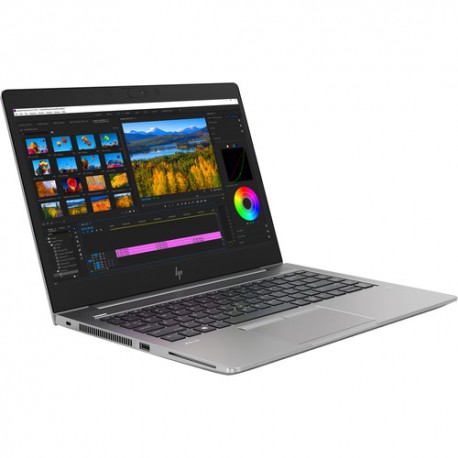 Thin at 0.71" and weighing 3.27 pounds, the 14" ZBook 14u G5 Mobile Workstation from HP delivers workstation-class power to a portable form factor for executives who are on-the-go. This system is powered by a 2.5 GHz Intel Core i5-7200U Dual-Core processor, which allows you to run multiple applications simultaneously and power through tasks such as spreadsheets, CAD, Adobe, and Autodesk applications. If you need more power, the system can be overclocked to 3.1 GHz using Intel Turbo Boost 2.0 technology. The 8GB of 2400 MHz DDR4 RAM comes in a 1 x 8GB configuration and helps to ensure smooth multitasking and also allows the computer to quickly access frequently used files and programs. Using a 16GB module in each of the two 260-pin SO-DIMM slots, the system's memory can be upgraded to 32GB.

The 14" UWVA IPS anti-glare display features a Full HD 1920 x 1080 native resolution, LED-backlighting, and a 16:9 aspect ratio. The AMD Radeon Pro WX 3100 graphics card has 2GB of discrete GDDR5 memory and delivers a sharp, clear picture. You'll also be able to output video to an external display at resolutions up to 3840 x 2160 using the system's DisplayPort 1.2 output by way of Thunderbolt 3, as well as HDMI. Up to three independent displays are supported.

For storage of your files, this ZBook 14u G5 is equipped with a 256GB NMVe PCIe M.2 SSD that uses Tri-Level Cell (TLC) flash memory. If you want to add external storage, optical drives, memory card readers, and more, the ZBook 14u G5 offers one 40 Gb/s Thunderbolt 3 port and two USB 3.1 Gen 1 Type-A ports, one of which doubles as a charging port. Gigabit Ethernet and 802.11ac dual-band Wi-Fi (2x2) are built-in for wired and wireless networking and Bluetooth 4.2 technology will also allow you to connect additional compatible peripherals. A built-in SD/SDHC/SDXC card reader supports UHS-II flash media and lets users download content from their digital camera. Other integrated features include dual-array microphones, stereo speakers with Bang & Olufsen HD audio, a smart card reader, and Near Field Communications (NFC).

The ZBook 14u G5 includes an Elite Services card, a 65W AC adapter that operates using 90-265 VAC at 47-63 Hz, and an HP Long Life 3-cell / 50Wh lithium-ion polymer battery that supports HP Fast Charge that can recharge up to 50% in 30 minutes when the system is off or in standby and last for up to 10 hours before recharging is required. The installed operating system is Windows 10 Professional (64-bit) and protection is provided by a limited 1-year parts and labor warranty.

Thunderbolt 3
Thunderbolt 3 is a hardware interface that utilizes the reversible USB Type-C connector. Doubling the speed of its predecessor, Thunderbolt 3 features a maximum bi-directional throughput of 40 Gb/s when used with compatible devices. The connector also transmits data via USB 3.1 at up to 10 Gb/s, and dual-bandwidth DisplayPort 1.2 allows you to simultaneously connect two 4K displays or one 5K display. Additionally, you can daisy chain up to six devices from a single Thunderbolt 3 port.

Gigabit Ethernet & 802.11ac Wi-Fi
The system uses a Gigabit Ethernet controller for Internet access when connected to a router, modem, or network switch. It also features Intel Dual Band Wireless-AC 8265 which is compatible with 802.11a/b/g/n/ac Wi-Fi so that users may access network connectivity using wireless technology.

Up to 32GB Memory
While this system natively includes 8GB of 2400 MHz DDR4 RAM in a 1 x 8GB configuration, it can be upgraded to a maximum of 32GB when 16GB memory modules are used in each of the system's 260-pin SO-DIMM slots.

Near Field Communications (NFC)
Near Field Communications (NFC) is a set of communication protocols that enable two electronic devices, one of which is usually a portable device such as a smartphone, to establish communication by bringing them within 1.6" of each other. NFC devices are used in contactless payment systems, similar to those used in credit cards and electronic ticket smartcards and allow mobile payment to replace/supplement these systems. This is sometimes referred to as NFC/CTLS (Contactless) or CTLS NFC. NFC is used for social networking, for sharing contacts, photos, videos, or files. NFC-enabled devices can act as electronic identity documents and keycards. NFC offers a low-speed connection with simple setup that can be used to bootstrap more capable wireless connections.

Start Menu
After its hiatus in Windows 8, the Start Menu has returned. Utilizing a combination of the traditional menu system and Windows 8's Live Tiles, the improved Start Menu gives you more information at a glance, showing notification information alongside your applications and other pinned items.

Cortana
Microsoft's digital personal assistant, Cortana can answer your questions with information gleaned from both your device and the internet at large. You can type or even talk with her, if your system has a microphone. Using her Notebook, Cortana keeps track of your needs and wants, and she learns over time to improve her information gathering skills.

Microsoft Edge
After nearly 20 years, Microsoft has finally replaced its Internet Explorer web browser. With Microsoft Edge, users can write directly on web pages and share notes with friends and colleagues. It also improves the online reading experience by adding a distraction-free mode and read-it-later functionality. Edge also has built-in Cortana integration; you can have her help you find a restaurant, make a reservation, and pull up directions without leaving your browser.

Windows Store
For Windows 10, Microsoft has unified the Windows Store. Now, apps for PCs, tablets, and phones will all be accessible from one place. And with support for Universal Apps, one version of an app can work across all your compatible devices automatically.

Windows Continuum
Windows 10 was designed for a variety of screen sizes and input styles, and with its Continuum feature, it automatically adapts to fit your needs. A Windows 10 tablet on its own requires a touch-centric approach, but attaching a mouse and keyboard will shift everything to a more traditional interface. You can even attach an external monitor to your Windows 10 phone for a near-desktop experience. But it's not just the operating system; Windows Universal Apps take advantage of Continuum as well.

Xbox on Windows 10
Gaming is a big focus of Windows 10. Xbox integration allows for PC players to match up against Xbox One players on supported games, and if you have an Xbox One, you can even stream compatible titles to your PC. Native support for recording with the new Game DVR feature makes it easy to capture and share your gameplay. The new DirectX12 takes better advantage of multi-core processors, giving games a performance boost, even on older hardware. Windows 10 also features native support for virtual reality headsets, such as the Oculus Rift.

Windows 10 Pro
The Pro version of Windows 10 includes all of the features of Windows 10 Home plus many designed specifically for business users, including Hyper-V virtualization, BitLocker disk encryption, and remote desktop access. Devices will also be able to join domains and the Azure Active Directory, and they can even access a specialized version of the Windows Store featuring custom, company-specific applications.